Note: This post was published in September 2012, and a lot has changed since then (it’s now March 2015). We’ve rewritten it a bit to reflect the changes since then, most importantly: the relocation.

Back in 2012, this was our favorite night market in Bangkok.  Talad Rot Fai, which translates into english as “train market” (talad = market, rot fai = train).

It had gained popularity as a retro lovers and (affordable) antiques market, lots of vintage clothing, retro furniture and memorabilia, but has expanded into other kinds of merchandise too.

The market is open on Friday, Saturday and Sunday and the best time to come here is around 7 or 8pm, and people generally leave around midnight, but there is still plenty of action going on till around 2am – unless it’s raining. But even then you’ve got cafe’s with life music and a great atmosphere.

Surrounding the open market area are plenty of wooden shophouses where you can find antiques – a lot of it low value stuff, but every once in a while you can spot a real gem.

How about old luggage? Yet, also at Talad Rot Fai.

About the owner of Talad Rod Fai

The owner of the market, Pairod Roikaew, has been peddling wares for many years already before opening his own market. You can read a short interview with him here.

How To Get There

The market used to be at Kampaeng Phet station, but it’s now relocated to Ratchada, we’ll share how to get there soon. One night the State Railway went in and shut the market down, and all the vendors had to find a new location. 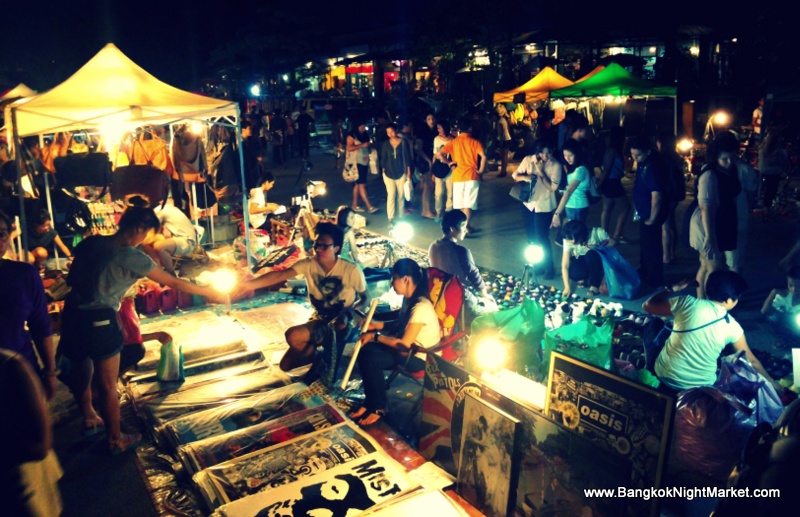 On the right handside you can see a popular cafe/bar/restaurant with life music (but they usually start the life music at night): 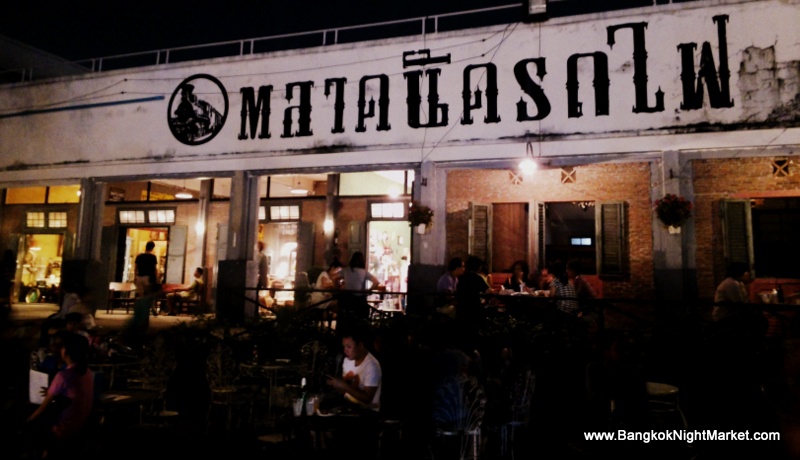 You really find all kinds of stuff here, and it’s interesting and fascinating just to walk through here and watch (both what’s on sale on also the people here): 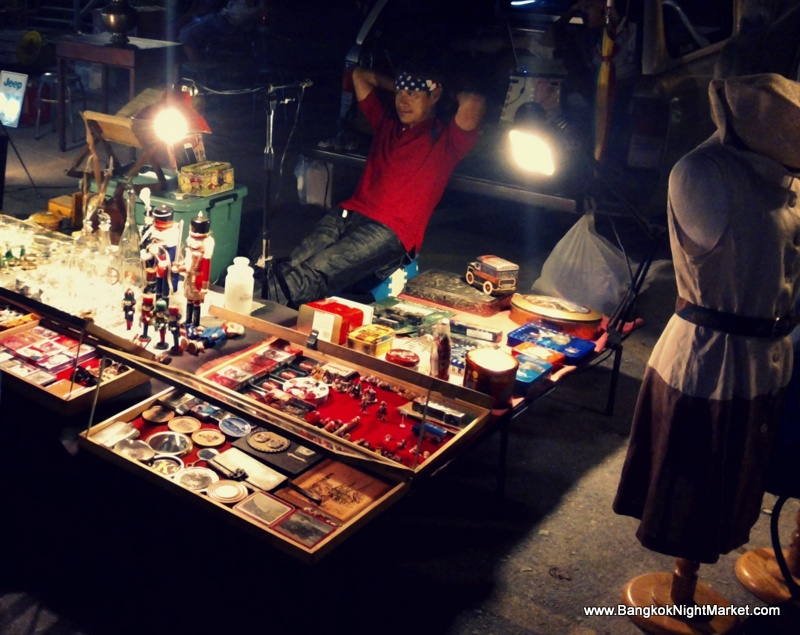 Don’t worry about pushy sellers, trying to nag you to buy something from there. You won’t find anything like that here. In fact, if you want to buy something you’ll have to occasionally wake up a sleeping vendor: 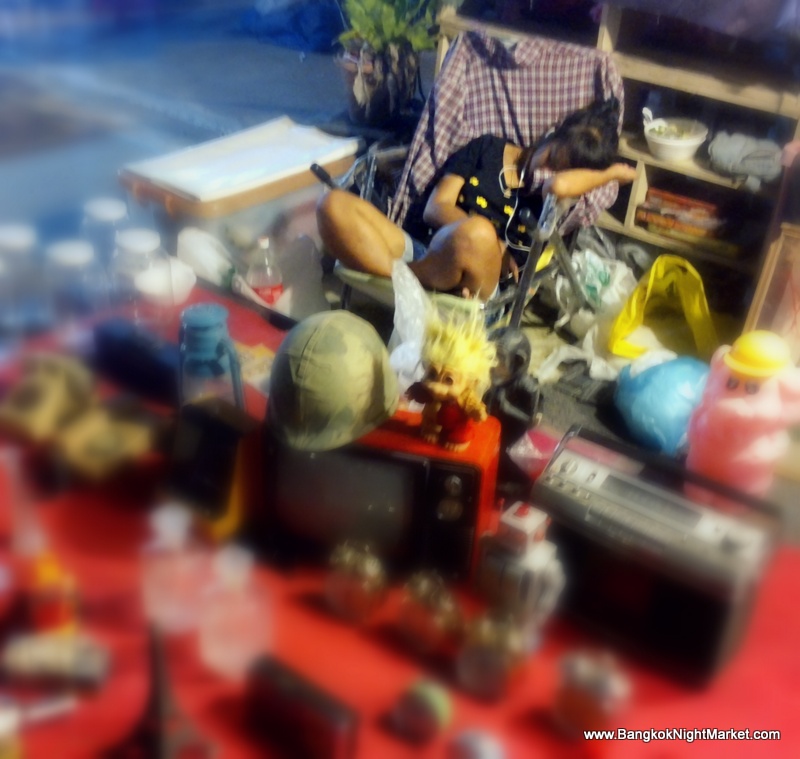 There are several old German VW buses, the most popular hippie car ever. Some are in excellent, refurbished condition like this one: 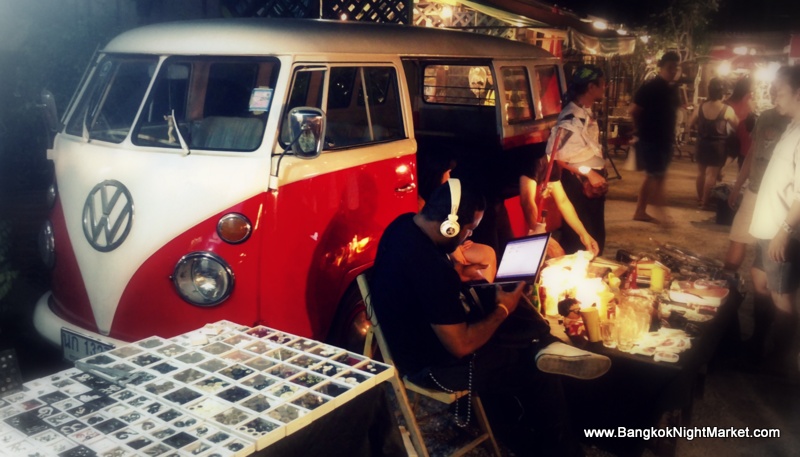 There are also some oldtimer cars, although I doubt they’re still driving: 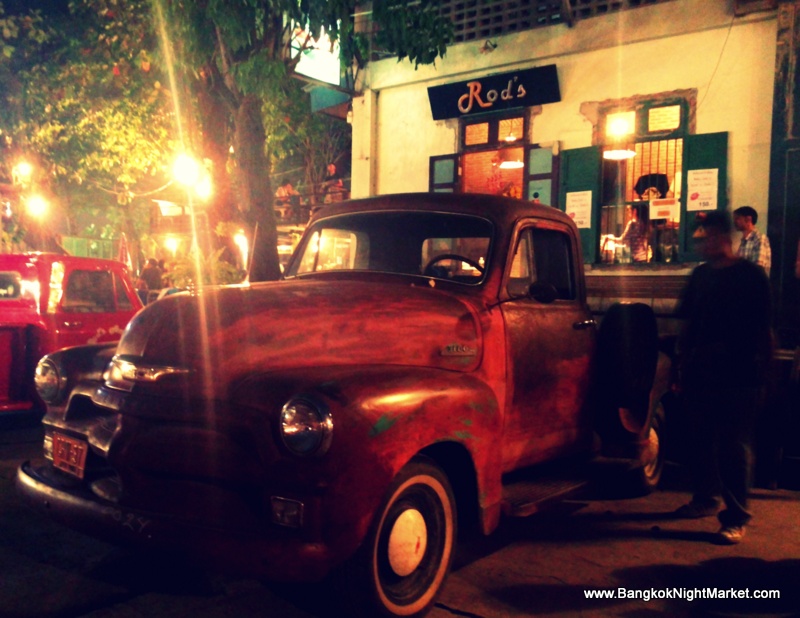 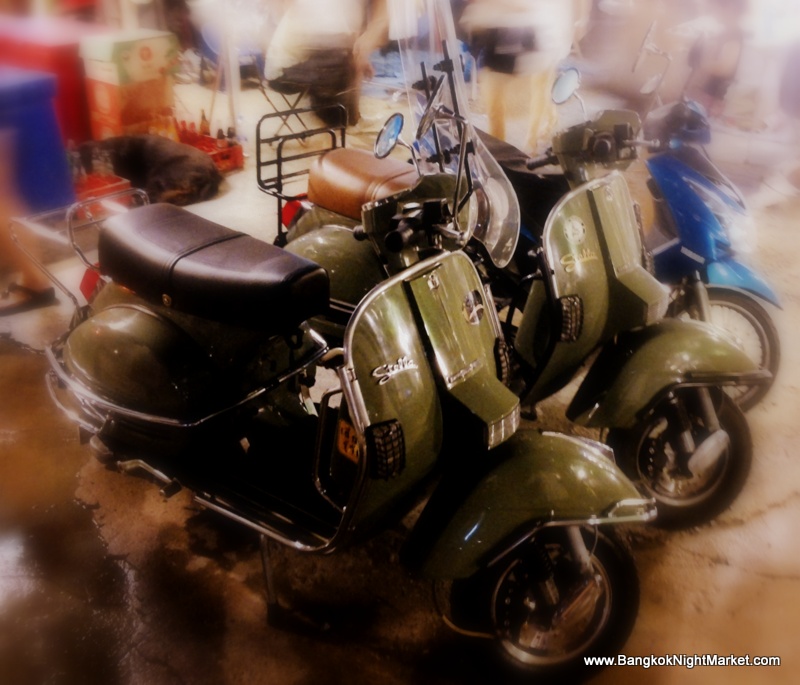 And as you would expect from a proper Bangkok night market, there is plenty of food. Some delicious and simple popular Thai staples: 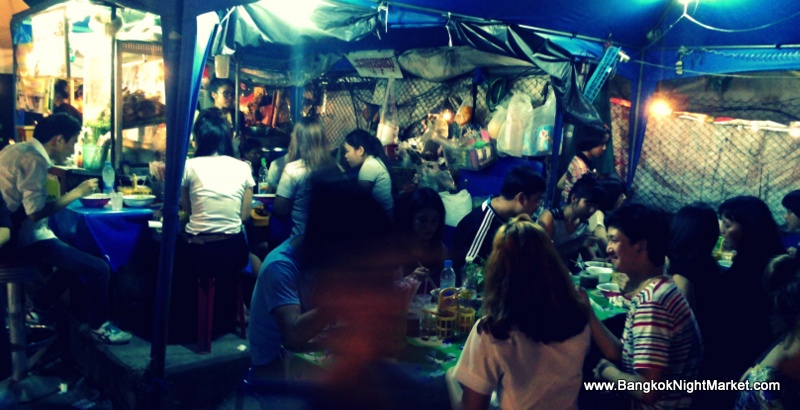 And some yummy delicious iced mochi, that doesn’t not just look colorful but tastes good too: 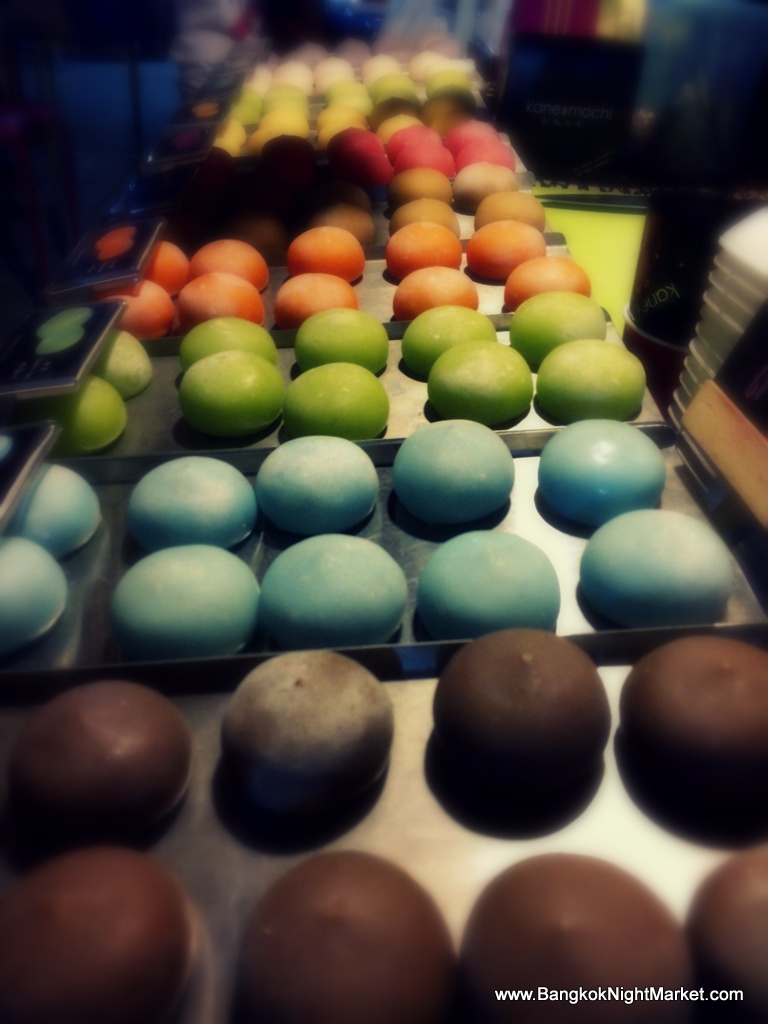 Different colors, different flavors, but I really liked the Thai tea flavor (the orange ones): 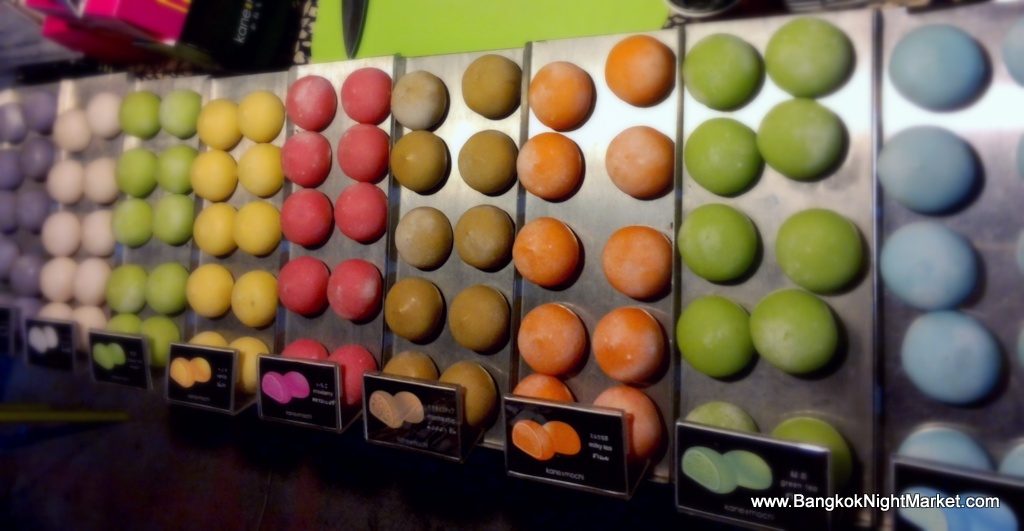 Speaking of Thai tea (cha yen), there’s a shop where you can get some nice sweet iced Thai tea of course too: 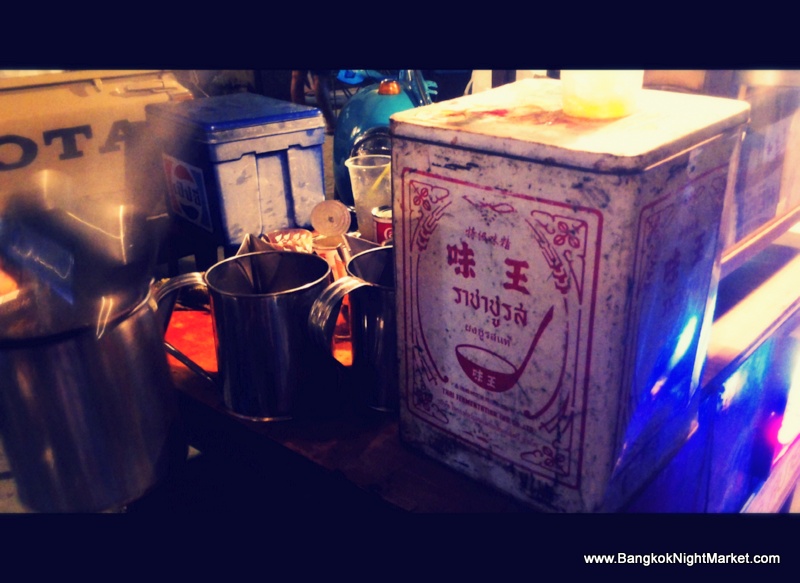 And if you’re old enough, you might remember what these are: 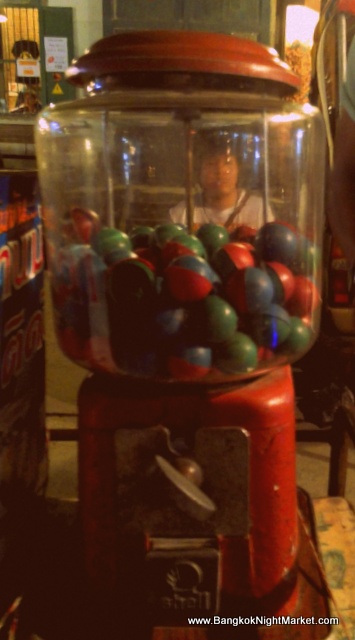 This is a nice little cafe in the middle of the main market area: 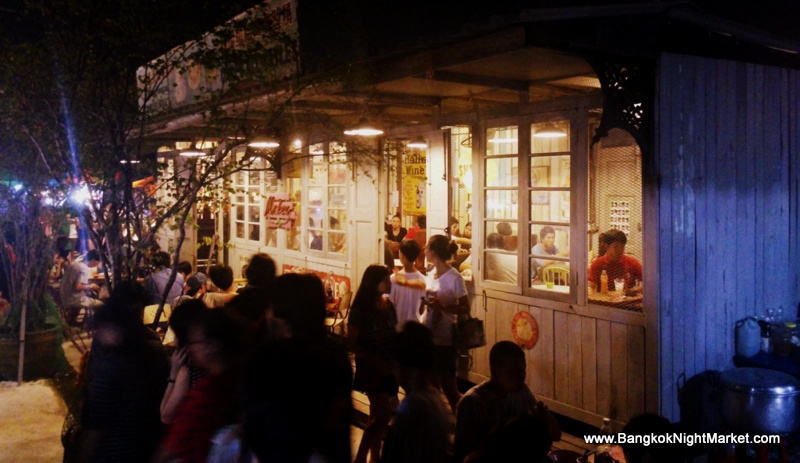 And if you’re looking for some unusual stencil art, you can find Batman, the Joker and even Adolf Hitler. Many Thai’s aren’t really familiar with the history of Hitler and what he did (just as many Westeners aren’t familiar with some cruel, massmurdering Asian dicators of the past), so they just view him as an interesting historical figure. 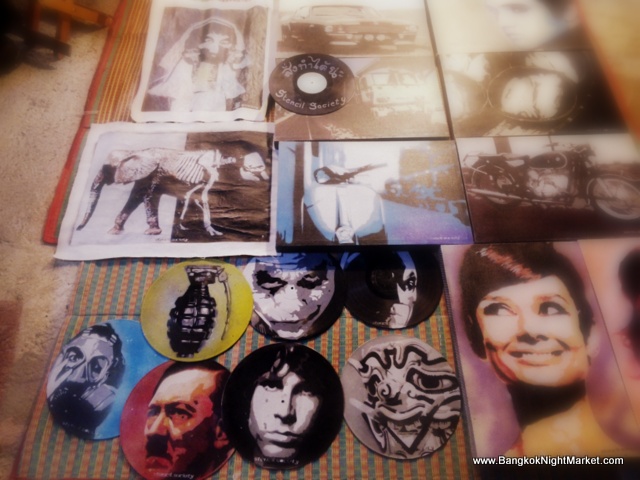